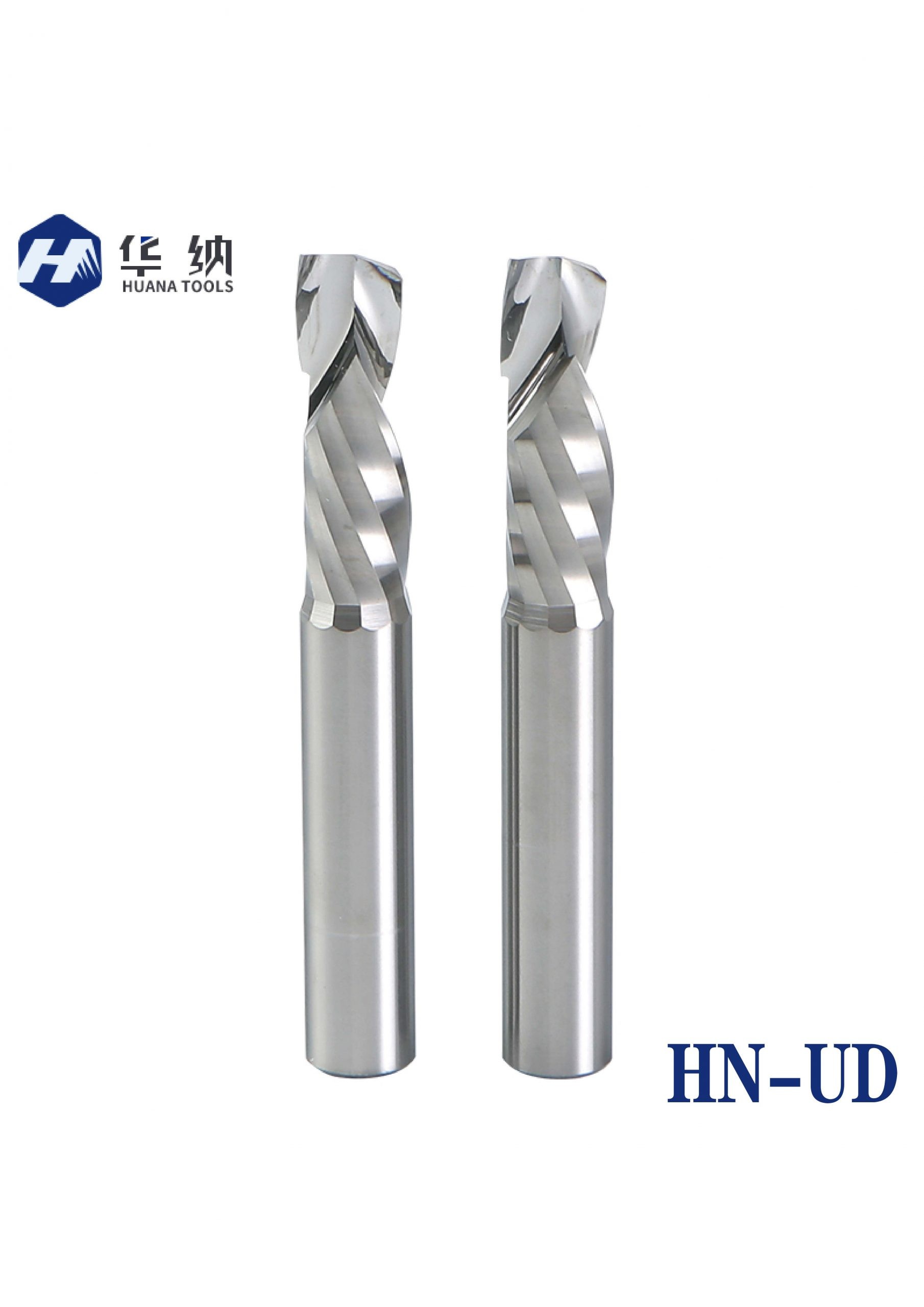 Up & Down Cut Spiral Bits

They’re my go-to router and CNC bits for anything from shallow grooves to total depth cuts and edge-joining and flush trimming.

Spiral router bits contain slanted cutting edges known as flutes that wrap around the bit in a spiral (as you might expect).

Angled flutes have several advantages, including improved chip evacuation, reduced heat accumulation, and cleaner edges – depending on the kind.

Spiral bits can be used with a portable router or CNC to make various cuts such as dados, rabbets, grooves, plunge cuts, and through cuts.

The angle of the cutting edges is the primary distinction between straight and spiral bits.

Straight bits have the disadvantage of cutting more material with each spin. As a result,

Why are spiral bits better?

Shear angles are just superior for cutting in general.

It’s why you use a hand plane laterally rather than straight on, why many tables saw blades have slanted teeth, and why segmented cutterheads work better on planers and jointers.

The most common spiral bits are down-cut and up-cut, with differences in cutting orientation and how wood chips are ejected.

What should you go with?

It depends on the material, the sort of cut, and which side of your board is the display face.

When we say “up” or “down,” we mean the direction the blades cut about the instrument, not the piece of wood.

Down-cut bits on a portable router or CNC cut “down.” But put the identical bit on a router table, and it’s officially cutting “up.”

Remember that down-cut pieces cut away from your tool and up-cut bits cut towards it.

The benefits of down-cut bits

In hardwoods, my most often used spiral bits are down-cut bits.

They produce no tearout on the tool side of your stock because they force fibers away from the tool.

They’re fantastic for cutting grooves with razor-sharp edges, especially in tearout-prone materials like highly figured wood, plywood, and other veneers.

You may also use them for sweeping cuts if you utilize a waste board beneath your workpiece.

They can be helpful for small components on the CNC because they pack sawdust into the kerf, allowing items to stay in place. 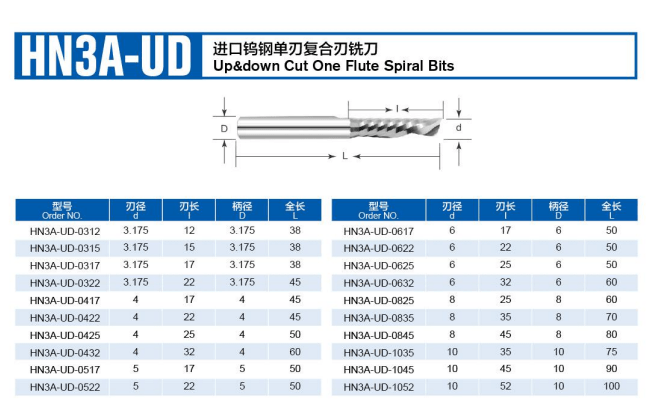 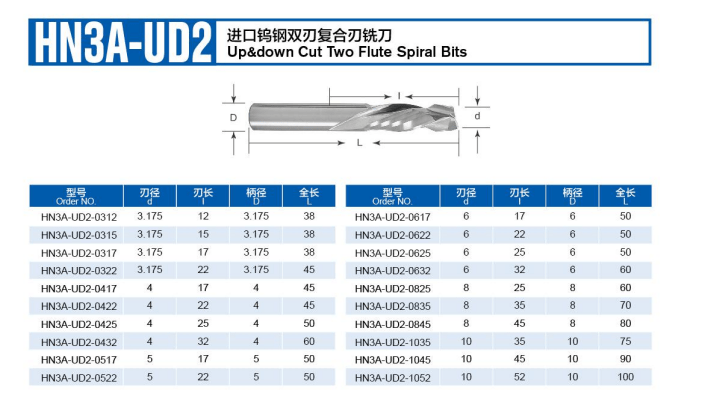 The Disadvantages of down-cut bits

Down-cut pieces have poor chip evacuation because they shove everything into the cut.

That means you must go a little slower with them or risk scorching them (especially in hardwoods).

It also implies they aren’t ideal for diving straight down. If you need to dive with them, it’s easiest to do it while moving, similar to ramping on a CNC.

While they provide a smooth edge on the side facing your motor, the opposing side is more likely to pull out.

BEWARE: Down-cut pieces will push your motor away from the stock.

This isn’t a problem on a CNC, but it’s something to keep in mind when using a portable router or router table.

Just make sure you have a firm grasp on your router or workpiece.

However, if you’re working with a straight-grained hardwood less prone to tearout, up-cut parts are the way to go.

How to differentiate between down-cut and up-cut sections

Do you know those candy cane-like objects that twirl outside of old barbershops?

As they spin, the lines appear to ascend or descend.

The same can be said of your bits.

Here’s what to do if you ever lose track of whether a clip is a down-cut or an up-cut.

The tip and initial 18 to 58 inches of the bit are up-cut, while the remainder of the bit is down-cut.

Now that Bits and I have released the new Short Flute version, this is my go-to bit for all through cuts, particularly on the CNC.

Compression bits provide a clean edge on both sides of a cut when performing through cuts.

It makes them ideal for plywood, melamine, and other veneers susceptible to tearout.

The CNC can run them approximately fifty percent faster. Feeds and speeds will be the subject of an upcoming video, but for now, we’ve included recommended settings in the descriptions of all our bits.

The initial pass must be deeper than the up-cut portion for a compression bit to function as intended.

Our short flute version is available in 1/4″, 3/8″, and 1/2 sizes “widths. The compression bits have the shortest flute lengths on the market, making them suitable for handheld and CNC routers.

A compression bit with a setting that is too high can cause the same tearout on the tool-side of the stock as an up-cut bit.

Compression bits can be problematic for small CNC parts, as the up-cut portion can pull up on trim tabs, causing them to break off. Make sure to expand or add additional tabs to your CAM file.

Combination bits with top and bottom bearings are my go-to for flush trimming workpieces to templates.

It enables you to quickly change the orientation of your workpiece, allowing you to work with grain direction without having to alter your bit or perform dangerous climb cuts.

Additionally, permanently remove as much material as possible before using a router.

Up-cut Bits accelerate cutting while pulling pieces away from work or towards the router. They are good bits for cutting material in a router table because they tend to secure the workpiece to the table. Perfect for mortising and tenoning, grooving, slotting, and routing deep blind holes.

Use spiral bits with a down cut to create grooves, dadoes, and inlays. Down-cut bits do not remove chips as rapidly as upcut spiral bits, but their down-cut geometry drives wood fibers down into the cut, resulting in a workpiece with a smoother top surface and less tearout. Down cut pieces necessitate a slower feed rate and a shallower depth of cut.

Notably, if you use spiral router bits on a table, the down-cut bit will drive material toward your workpiece, occasionally lifting it off the table. It will still produce a crisp-edged cut, but a robust downward feather board system is required to prevent the workpiece from rising. When used on a router table, make gentle passes.

Use up and down spiral bits if you need to cut both top and bottom surfaces precisely.

Up & Down spiral bits have a helix shape continuously in touch with the workpiece. This continual shearing motion provides smoother, cleaner cuts than a straight router bit, whose cutting edge repeatedly strikes the wood. The design and top tip of a spiral bit also allow it to be inserted like a drill.

Solid spiral bits are intended for exceptional performance and longevity. They effortlessly cut through hard or soft wood, plywood, and composite materials such as MDF and particle board. These micro-grain carbide cutters are manufactured using computer-controlled technology and feature our ideal helix design and a robust body that eliminates vibration and lasts up to 300 percent longer than standard router bits.

There are so many alternatives for router bits on the market that it may be tough to choose which one is ideal for your purpose. The issue of whether to use an up-cut or a down-cut router bit is one of the most frequent ones I receive.

Now that you understand the distinction between the two, how do you decide which to use? Up-Cut bits are pretty effective for expelling chips up and out of the cut. It will leave a smooth finish on the underside of the workpiece but a rougher finish on the top surface (or the side where the bit enters the workpiece). A down-cut bit has the opposite effect. Using a down cut bit is recommended for thorough cuts since it forces the chips down into the cut. Down cut pieces will leave a perfect shave on the top of the workpiece, while the bottom may be rougher.

Down-cut bits are especially useful for cutting shallow dados, rabbets, & visible slots due to the smooth edge it leaves on the hole or groove. When using a down cut bit to cut dados or grooves, lower the feed rate to allow for extra time for chip removal.

Try a compression bit if you require a clean cut on the top and bottom surfaces. Compression bits can be somewhat expensive, but they provide a stunning clean finish on both sides of the material being cut.

Spiral router bits have flutes that spiral around the bit. Spiral bits can make dados, rabbets, grooves, plunge cuts, and through cuts with a portable router or CNC. I prefer spiral bits to down-cut pieces in hardwoods because they leave no tearout. Down-cut elements force your motor away from the workpiece and reduce groove-cutting efficiency. When executing thorough cuts, down-cut and up-cut parts leave clean edges on all sides. Compression bits are perfect for tearout-prone plywood, melamine, and veneers. The new Short Flute bit is my go-to for CNC through-cuts. Create grooves, dadoes, and inlays with spiral and up-cut bits. Spiral bits are high-performance and long-lasting. Up cut bits are distinguished by the direction of their flutes. Up-Cut parts discharge chips from the cut. Down Cut pieces leave a smooth top but a rough bottom.