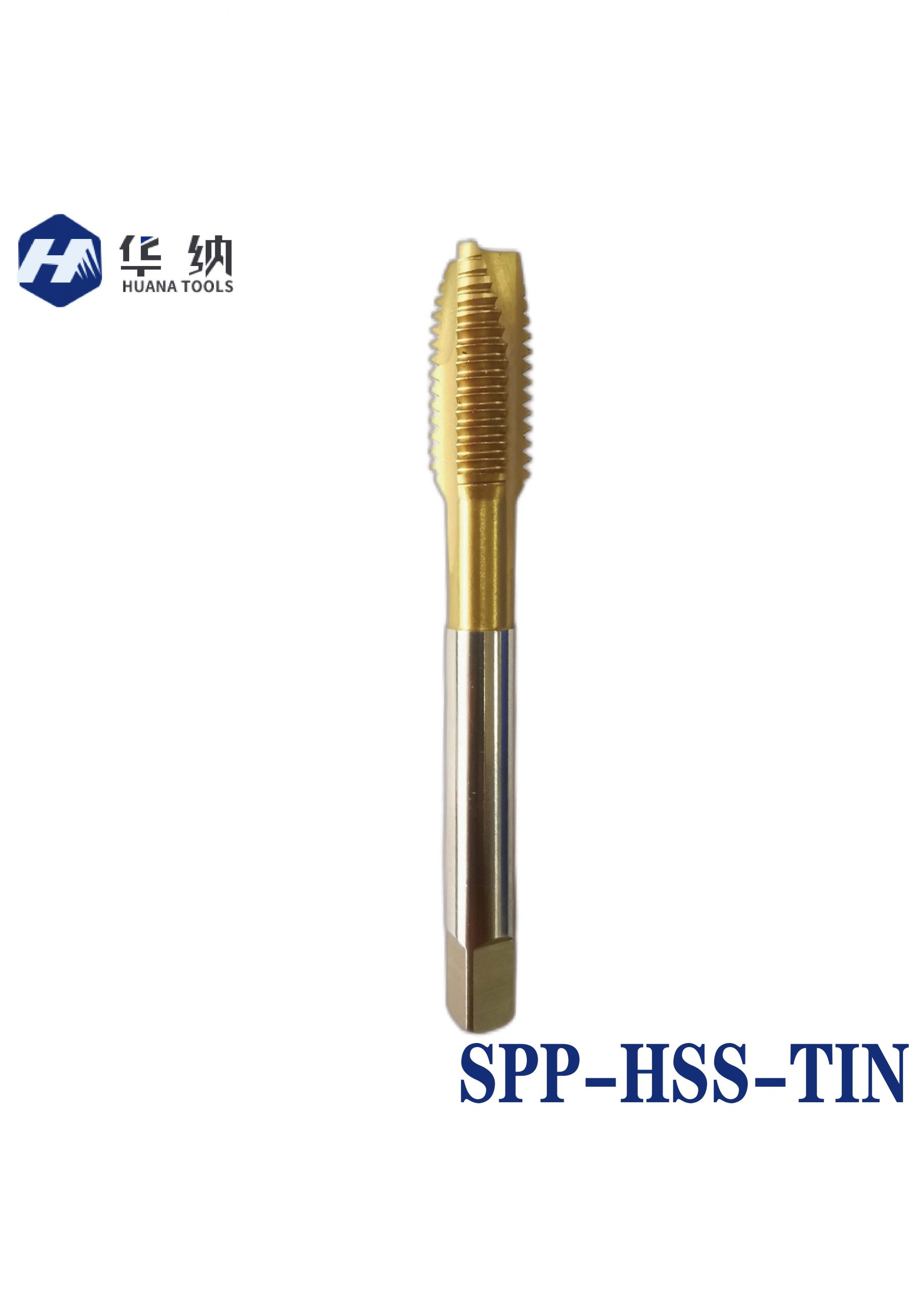 Carbide used in cutting tools was first developed in the 1950s, and it has been primarily used in cutting tools ever since. For over a hundred years, since the early 1930s, high-speed steel (HSS) has been used for cutting tools. The use of carbide material came about later and is regarded as the direct replacement for HSS. Due to their toughness, wear resistance, and hardness adequate to cut metal and other materials such as carbide, it is often used as comparative material. Due to their characteristics, they are regarded as the benchmark for comparison with cemented carbide.

What are flutes on taps?

When tapping is carried out, a groove on the tap is required to allow material to be removed during the process. A flute can be designed differently depending on the material to be removed to ensure the material is removed differently. Most hand tapping sets have straight flutes. Cut-in taps and machine taps are available with all the types of flute shapes that you can imagine.

There are two types of straight flute taps, the standard style and the special style suitable for the most diverse types of tapping. It is particularly helpful when cutting short chipping materials such as cast iron, which is particularly susceptible to chipping. Through-hole or blind drill holes can be tapped with a straight flute tap. Depending on the flutes that are used, straight fluted taps can be classified as A, C, D, or E. Generally, straight fluted taps are not recommended for deep threads due to the limited chance of chip evacuation at deep tread depths. 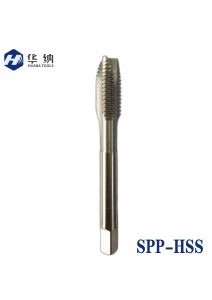 As with endmills, spiral flute taps have an open spiral arrangement just as they do with an endmill. As far as they are concerned, the primary advantage in their favor is that they can eject chips into the air. They’re great in cases where you have to deal with a blind hole, and you don’t want to use spiral point taps.

In addition to this, these spirals are also good for reopening an interrupted hole where another feature intersects because they encourage threading to start flowing past the interrupted feature.

In a few cases, you may want to perform a couple of identical holes by hand using a spiral flute tap and a regular hand tap if necessary. With the spiral flute tap, you will be blown away by the required amount of time and effort. No doubt choosing the right types of taps can make the difference! 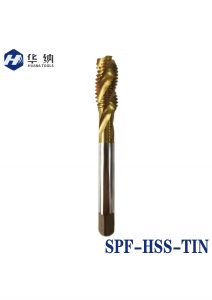 It is understood that the pipe threads are tapped with Pipe Taps, which is the type of thread tap often used in tapping pipes. The material of the pipe thread will determine the type of pipe tap that the pipe should be used: straight pipe taps or tapered pipe taps. Taps need to work harder for pipes with tapered threads because a tapered hole cannot be drilled. On the top side of the hole, there is quite a bit more material that has to be removed compared to the bottom side. Taper the hole before tapping to reduce the pressure on the tap so that it does not work as hard.

These taps are typically equipped with long shanks. These long shanks give you the flexibility to reach holes that are hard to access. A thread tap that calls itself the long shark tap gives it another name.

As the name suggests, HSS Metric Taps are used for making new threads or rethreading old or damaged threads. This type of tap is particularly versatile because you can use it manually or under power. There is also a wide range of materials where these HSS metric taps can be used in through or blind holed conditions in addition to the vast majority of materials described previously.

This thread tapping technology is ideal for the manual matching of threads or CNC applications requiring a high precision level. The above tips are hand-operated; they are generally referred to as hand taps since they are operated manually. As the machine runs, the machinist’s job is to periodically reverse, using a hand tap, to break the chip produced by the cutting process. Normally, the chip would crowd and damage the tap if it is not removed.

There are several types of power-driven taps available for use during cutting operations. Still, the most common type is the spiral point or gun tap, which uses cutting edges that are angled relative to the centerline of the tap.

Spiral flute plug taps, on the other hand, have flutes that look something like twist drill flutes, and these are another version of spiral point plug taps. Because spiral flute taps can be used in blind holes with relative ease, they are widely used in automatic tapping operations, where high speed must be achieved.

Spiral point taps feature straight flutes so that coolant is dispersed evenly throughout the tap. At the cutting chamfer, on the front edge of the flutes on this tap, there is a slanted angular gash that is designed for chip management. Through-hole tapping and threading are the main applications for this tap. 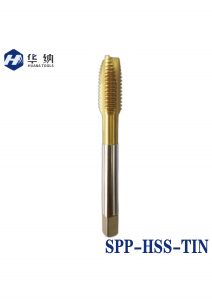 In the culinary industry, “tool steel” refers to various carbon and alloy steels that are used most often for chopping, drilling, and other cutting and drilling tasks. Carbides are formed in tool steel by a combination of the four major alloying elements: molybdenum, tungsten, chromium, and vanadium. In addition to carbide, high-speed steel (HSS) has also been utilized as a material for making most cutting tools.

High-Speed Steel is a high-carbon tool steel that contains a large amount of tungsten. It is also rich in Vanadium, Molybdenum, and Chromite and has many other minerals. The alloy steel mineral combines the properties of high hardness and high wear resistance, thereby forming a special class of highly alloyed tool steels. This is accomplished by providing a specific microstructure consisting of a matrix that has a hardness of around 65 HRC to withstand the high temperatures associated with high-speed cutting processes. Hss tap sets remain sharp for a much greater period of time than carbon taps and will not prematurely stain.

An HSS tool is also much more cost-effective than a Carbide tool and is often the better option in applications with a large mix of pieces and low volumes.

Steel made of Carbon with a metal alloy element, such as Aluminium or Copper, is called Carbide Steel. Commonly, tungsten carbide is referred to as a metal carbide since it is a common example of one. Using carbide tools makes it possible to machine materials with a harder hardness, which is typically 70HRC and higher. The red hardness of this metal is one of the highest in the world; even at 1000 °C, the hardness is still high. Moreover, tungsten carbide is very resistant to damage, and it is incredibly durable. The most popular applications for this material generally include drill bits and cutting tools, sports equipment, and ballpoint pen tips. Having a hardness much greater than steel, carbide tools can have a longer tool life and achieve higher cutting speeds than steel.

A carbide is generally stronger than regular steel, but it is also brittle and has a hardening tendency. It is ideal for modern machines since it has little chatter, making the cutter a good choice for use with this type of machine. It can also be used for longer before the cutter needs to be replaced or sharpened. They can be run on a platform up to 2.5 times faster than HSS cutters with a high-speed cut ratio. They can also operate at a higher SFPM than other metal cutting machines.

The brittle nature makes them preferentially work with a hydraulic holder. The coolants also don’t handle abrupt temperature changes well, so if you plan to use them to lower the ambient temperature, use them throughout the process rather than adding them halfway through. In addition to offering a better, smoother finish for your millwork, the higher speeds enable you to produce a better-looking finished product.

Hss tap sets will make you more productive if you’re working with old machinery that chatters since it is more flexible and can withstand this type of abuse better than carbide cutters. Furthermore, it is less expensive than its carbide counterpart, although it does require more frequent sharpening or replacement.

Following are some of the most commonly used raw material for HSS TAPS:

In addition to producing drills, taps, turning tools, and saw bits, high-efficiency wood tools are also manufactured on this machine. There is economical high-speed steel that is low-alloy with good ren hardness, good toughness, and thermal plasticity. This steel is generally used in soft metal and has a moderate intensity.

A cobalt alloyed high-speed steel is known as HSS M35, and conventional processes make it. A good quality end product can be obtained from the various manufacturing stages by picking and controlling the methods to achieve a good structure when it comes to the size and distribution of carbide. Having this characteristic gives the finished tool a distinct advantage.

Tool steel M35 High-Speed Steel is characterized by a good combination between versatility, ease of machining, performance, and hardness in hot conditions.

HSS M42 is an alloy containing molybdenum series high-speed steel plus cobalt to an additional eight to 10 percent. Among the other types of high-speed steel available, it is used extensively in metal manufacturing industries due to its superior red hardness. As a result, production cycle times can be reduced, as its higher cutting speeds allow it to achieve faster cutting speeds, and as a consequence, its interval between tool changes is also longer. As well as bearing less chipping, M42 is less expensive than carbide tools and is less prone to chipping at the same time as interruption cuts.

For heavier construction drills, high-speed steel M7 steel is used as the primary material where a long drill life and flexibility are crucial. The most popular steels used in today’s high-speed machining processes are molybdenum high-speed tool steels, also known as M7 steels. The carbon and vanadium contained in this steel make it good for retaining abrasion resistance. As a premium tool material, it offers an excellent balance between red hardness, edge toughness, and wear resistance, making it an ideal option.

You can choose between having either one of them as part of your toolkit or even having both, depending on your skillset and preferences.